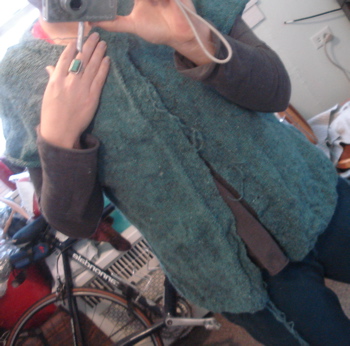 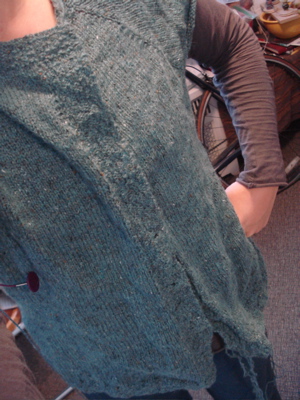 Yesterday I was feeling inspired by all of the “finish or frog” talk on ravelry, so I dug out my brompton cardigan and took some pictures. (I have to be honest: these are the good, hopeful ones. I have other pictures where it looks way too big.) See, I love this sweater. I cast on in January 2008 in Rowan Felted Tweed, imagining that this would be a cardigan I’d reach for often when I was in grad school. Fast forward two years: I am in grad school, I do wear cardigans, but this one isn’t done yet.

The trouble is, I really didn’t understand ease and sizing as well as I thought I did when I cast this on. Bottom line? This is essentially a 42″ sweater, with the body finished and the button bands both knit and seamed onto the sweater. (This would have been big on a 2008 rooster, and I am smaller now.)

I LOVE this pattern, love the yarn, and I don’t want to frog this, so here’s what I’m thinking: decrease as I knit the sleeves so that they are slim and fitted, and maybe only 3/4 length. The cardigan itself is light and drapey. I’ll never wear this all buttoned up because of how big it is, but I could see it as a layering cardigan. I may be able to sew closed some of the button holes discretely (because of the basketweave stitch) and either give it an asymmetrical closure or one bigger button in the upper half of the sweater.

Thoughts? (Are you with me? It’s okay if you’re not. I could really use some advice on this one.)

I am excited about my Brompton cardigan — a bit nervous, as this is the first time I have tried to fit something to myself — but excited all the same. The fit in the chest seems perfect, but the armholes seemed a bit loose on me. The prospect of ripping back a few rows to take out the raglan increases in the arms seemed less than enjoyable, so I decided to divide and try it on again to get a better sense for how it will lay.

This picture made me feel a bit better. It may be a tad loose, but I want the fit to be similar to Alice’s, with some positive ease so that it is comfy and can be worn over layers. The last 10 rows took forever, but those are also the longest rows, so I think the next bit will be  bit quicker (in my head, at least!). Have I mentioned (today) that I love Rowan Felted Tweed? It is gorgeous. I love the bits of orangey brown — they offset the blue-green color perfectly.

As the theme of the day is scrap yarn, I didn’t stop there.

[Note to self: Shiny-ish yarn, unfinished, cropped sweater, arms length away — these do not make for flattering photographs.]

I present Rusted Root! I began this in September, and have been working on it whenever I am on an airplane. I may have to break that rule, as I just need to knit another 6 or so inches and then knit the ribbing on the bottom, neckline and sleeves. I switched from some hot pink plastic Susan Bates needles to my KnitPicks Harmony Options, and got this project all settled in a very pretty knitting bag. It would be great to wear this in a few weeks when spring arrives…

As I write this, there is a mixture of snow and freezing rain falling. Snow day?

Actually, every day is a silly dog day around here. Though I’ve been making some serious knitting progress, in the form of another foot of length on my gathered scarf, a few more pattern repeats on my magic loop socks, and even some decisions on how many more increases my brompton cardigan needs before I divide for the sleeves, it is hard to see this in pictures. Rather than bore you with the equivalent of the WIP photos I shared yesterday, I figured we’re due for some ridiculous dog pictures. Allow me to share a few from this week: 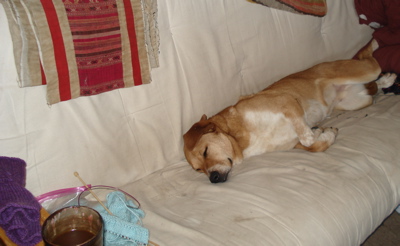 That’s my dog: full of decorum, appropriateness, etc.  You can’t tell from the picture, but he is twitching and snoring, perhaps dreaming of having some uninterrupted time to throw and retrieve whatever ball of yarn is attached to my knitting needles and ALMOST within reach. Happy Friday!

Yes, that’s right. I’m still only about a third of the way through the first cup of coffee on this fine Monday morning, and I’m trying to make sentences out of my current WIP names. I was hoping for natural light, but it is overcast and I am impatient. Bear with the gloomy photographs.

As my incredibly creative sentence indicates, I have, indeed, cast on for Clapotis. You know where to find it.

I cast on for this (multiple times) a bit more than a week ago, but couldn’t for the life of me figure out how to do a pfb. Knittinghelp.com to the rescue! I wanted to keep this one quiet until I was sure I was ready for the pattern, but I am past the set up rows and into the increase section. 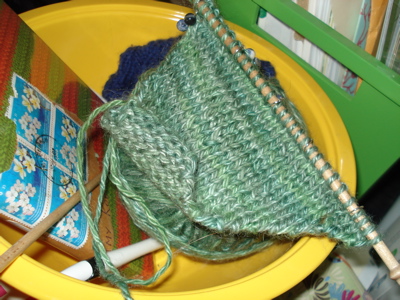 Also, you know I’ve been working on my second My So Called Scarf from Sheep in the City (Ravelry link – coffee hasn’t kicked in yet.) This is sort of hard to photograph because it is so dark. Also, I chose a less variegated Malabrigo, and I am really liking this. Originally, I thought I would keep this for me, but now I am not so sure. I am only about halfway through the first skein, and I have thought about making a shorter “tucker” scarf. Do we think this colorway/pattern is appropriate for/would be willingly worn by boys? Discuss.

Lastly, another WIP I am super excited about — also in Malabrigo: Foliage! (Ravelry link) I bought this yarn at Loop when I was in Philadelphia in September, intending to cast on immediately. I tried to — really, I did. I just couldn’t join 8 stitches in the round without twisting them or getting confused about which side of the needle was next because it was such a small loop. I must have worked and reworked the first two rows, trying to get them right, for an hour one evening. Broken, I set it aside for another day. Picked this up yesterday and cast on without a problem. I’ll take it! I’ve completed the first 19 rows for Version 2, and am ready to begin the pattern.

I am in love with Malabrigo. Sigh.

Time to go face Monday. What did you work on this weekend?

Mornin’ folks. There are multiple roosters crowing outside my window right now. Seriously. The sun is not quite high enough in the sky yet to allow me to take pretty pictures of the Baby Bib O’ Love I started (you know, the kind where the light streams through the window), so bear with me. The bib is done, minus a button. Pictures soon.

In other news, in honor of the Fall Fingerless Mitts KAL, I present to you Dashing, from knitty, intended for my brother, who spends a lot of time both training other people’s dogs and playing with his own adorable pitbull. I made these in Jo Sharp Silk Road DK Tweed (found on sale at my LYS) using size 7 needles. 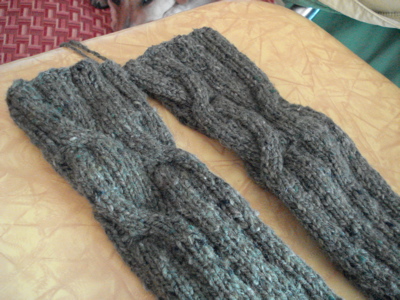 I worry that they may be a bit tight, as I don’t have a good sense of how big around his forearm is, but they should be okay. Confession: midway through the second mitt, I said to myself, “I remember what I’m supposed to do on this cable row. No need to look at the pattern, Rooster.” A row before bind-off, it became clear that my second mitt did not have offset cables. Instead, they were all in the same column. Rip, rip, rip. These aren’t quite done yet — one more thumb to pick up, but they are a holiday gift, so I have a false sense of being in good shape for gift-giving. This is the first holiday season that I have been a knitter (well, since that unfinished scratchy scarf turned potholder my grandmother helped me on), and I’m not quite sure what folks are expecting. What are you giving as knitted gifts? Are you making ten of something, or choosing individualized patterns for the people in your life?