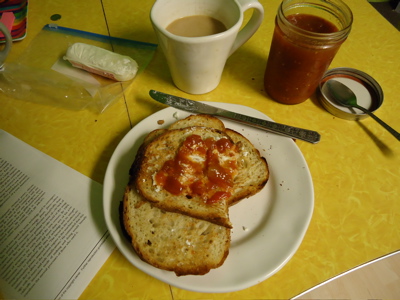 Friday morning, tomato jam and goat cheese on toast. This was exactly what I needed to start the last day of the (school) week. The jam is very sweet at first, and then the flavors smooth out a bit and there is a nice kick (from the chili flakes) at the end of a bite. I was concerned about the consistency of the jam — seemed a bit loose to me — but this was well within the range of the jam category, though I spread it with a spoon instead of a knife. I’ve been reading a bunch of food blogs that focus on preserving, and I’ve seen some discussion about how flavors mellow and meld as canned food sits on the shelf. Or in the fridge. This makes sense — the last jar of my summer 2009 dilly beans were different than the earlier jars. And some meals that are just alright as dinner are incredible as leftovers.

So I like this! It appeals to my love of savory breakfast food, and I’m interested to see if the flavors in this jam mellow over the next few weeks (for the jar in the fridge) and months (for the jars stacked on the shelf). My next plan is to slather this stuff on grilled cheese, and to think about using it as a sweet/spicy homemade alternative to ketchup (and someday, I’ll try my hand at making my own ketchup!).

Also, Friday morning it was chilly enough for a fleece vest and my handspun (knitted) toast. (I swear I wasn’t thinking about blog post content when I both ate jam on toast and then put on a pair of toast. But it works, doesn’t it? Silly rooster.)

Speaking of silliness, somehow the boy managed to get Boh perched on a chair. And then Boh serenely gazed out the window. 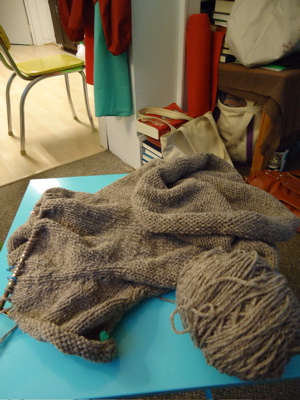 On Friday night, after a long week, we curled up and watched a movie, which meant that I finally picked up my idlewood. I am super close to separating the sleeves from the yoke. And I am super excited about this sweater.

Also, remember all that produce I posted about? Stay tuned for a whole slew of kitchen adventures… 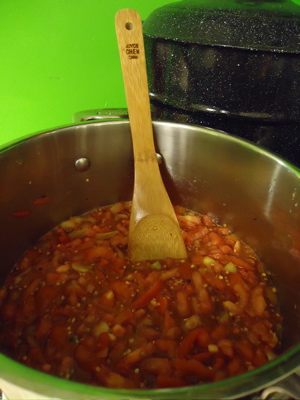 Last night I made tomato jam. And even though incredible aromas filled my entire apartment, I think I need to take my own advice next time and avoid evening canning. See, the recipe calls for allowing the tomato mixture to simmer for 1 to 1.5 hours, in order for it to get all sticky and jammy. And after 1.5 hours, I stirred my mixture and thought to myself, “Well…it isn’t quite thick enough, but it has been an hour and a half, and I am tired, so I’ll go for it.” Then, I packed the jars (mostly tiny jars and a few half pints) with a ladle. I think a slotted spoon might have been a better idea, in order to create a stickier jam. (The strawberry-balsamic jam recipe that I love uses a slotted spoon, and separates the gooey bits from the thinner syrup.)

All that said, I am excited to try this, and am hoping that the water bath/cooling time has helped a bit with the congealing. And in the future? I’ll start this in the morning, so that my tiredness is not a factor in deciding when my jam is jammy.

I haven’t tasted this stuff yet, but I’m guessing it is amazing. I had a pint or two leftover, due to the small size of the jars I had handy, so I tucked that into the fridge. Planning to spread it on toast with some goat cheese for breakfast…I’ll report back. 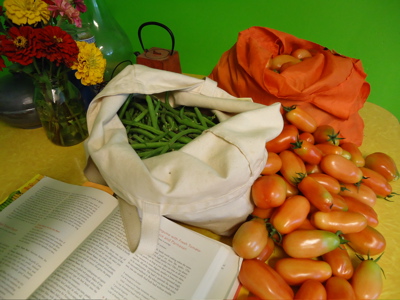 The farmers at the CSA I belong to send out an email with the week’s “veggie forecast.” This week’s report suggested that the nights are getting cooler, and that a lot of the crops available for picking will likely last only until the first frost…which might be here sooner than we think. So, yesterday, instead of knitting sleeves as a break from my reading, I decided to spend an extra hour at the farm. I gathered at least 15 quarts of paste tomatoes, a canvas bag full of green beans, and a few handfuls of tomatillos for salsa — all in addition to the week’s share (onions, peppers, cabbage, cauliflower, tomatoes, salad mix, basil, parsley, potatoes, leeks).

Looks like that veggie forecast has turned into a bit of a rooster forecast — I think I know what I’ll be doing this weekend! (Preserving. I just saw a recipe for tomato jam that looks pretty yummy, I’d love to can a few more quarts of tomatoes for the shelf, and I can always use more dilly beans…)

Also, I couldn’t help myself. I picked a huge armful of zinnias — the fields are still practically overflowing with them. Yesterday was the first farm day that felt like fall, and the cooler temperatures made it much easier for me to linger in the rows of herbs, flowers, and veggies. 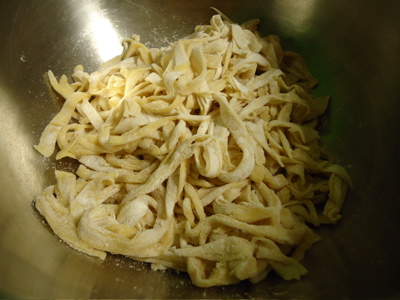 I had about a quart of handpicked paste tomatoes that had ripened nicely in the fridge yesterday, and the plan was to make a small pot of sauce. I actually finished the book I had set out to read yesterday, so I decided to do something more elaborate — homemade noodles. This was the first time I’ve ever hand-cut noodles to a fettucine-ish width, and boy, do I need some more practice. Despite their irregularities, the noodles were delicious. We ate them immediately, with some homemade sauce. (And I didn’t even think to take a picture. My stomach was too excited about dinner.)

I do, however, have some non-pajama action shots of my textured shawl to share. 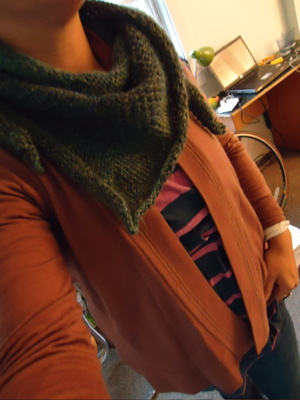 This is slightly too scratchy to be worn super close to my neck, but draped a bit more loosely, it adds a nice amount of warmth. It is also perfect to wrap around my shoulders while curled up on the couch. This will certainly be in my rotation of warm things this fall and winter — and I think it might look really nice with my Kerrera! Extra motivation to start those sleeves later today…

Ahh, Friday. Today’s title is a mixture of elements from each of the things I have to show you. (It has been a long week.) 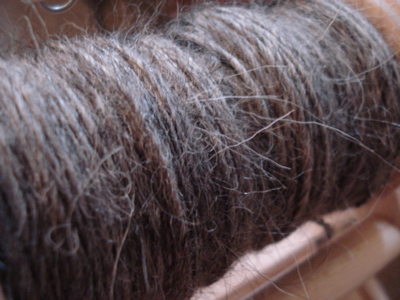 This is Norwegian top, from the big, basic fiber order I placed right when I got my wheel. It is softer than it looks, but I’m not quite sure how to tame all of these super short fibers. I divided my 8 oz into 2 chunks, and I’m working on turning the first 4 oz. into some basic 2-ply. I’m interested to see what happens once I ply and set the twist. Anybody have experiences with this fiber to share? 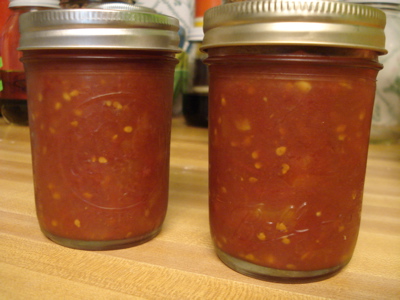 Last night I made this tomato jam. I am planning to bake bread today in order to enjoy it. I am very, very excited.

As you can see, I won my race with my ball of handspun — and I even had about 15 yards leftover. Next up: blocking and buttons!

Also, yesterday was full of surprises! First up, this set of Baggu bags arrived from Joy the Baker, along with a lovely note about how I’m a winner. (I needed that.) I cannot wait to take these to the farm this week. Plus, I heard from a college friend who just happens to be within a few hours of New Home, so she is driving down for the day!