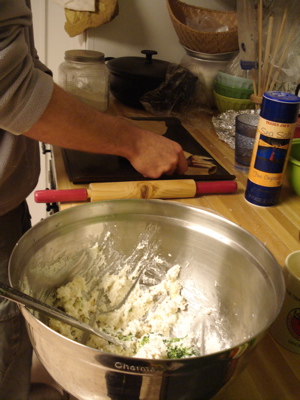 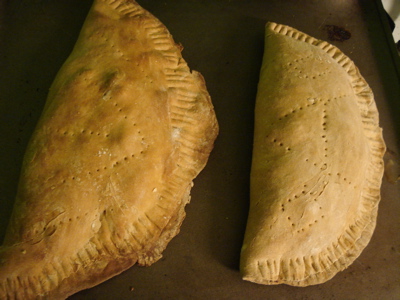 Despite my success with pizza dough earlier this week, it seems that I still have a thing or two to learn about calzones, and in particular, the behavior of white-whole wheat flour. I made exactly the same dough recipe, but with white-whole wheat, and it just did not rise this time, which yielded a rather dense calzone dough. These were good, but an airier, dare I say, doughier crust would have made them fantastic. Well, that and not eating an entire loaf of farmers’ market bread BEFORE putting the calzones in the oven.

I’m pretty sure I’m ready to jump back into the land of productivity, and my new sheepy slouch will certainly make it a slightly warmer leap!

Details: Le Slouch, by Wendy Bernard.US 7 needles, sheepy Romney/Corriedale blend worsted from the Merck Forest and Farmland Center. CO 74 st, knit 6.25 in before decreasing. I’m not letting Boh get this one.

The spring semester starts Monday, and there are certainly productive things I could be doing (like brushing up on my skills in a certain language so that I can pass a translation test whenever my department decides they’ve found someone to administer it), but instead, I’m knitting a hat. Boh ate my favorite squishy malabrigo cabley slouchy hat (see previous post), but instead of replacing it with a malabrigo look-alike, I’m craving something a bit sheepier, if you will. Enter my second le slouch. This one will be slouchier than the first, and a bit tweedy in appearance. I’m knitting it out of a Romney-Corriedale blend purchased as part of last winter’s snowshoe adventure at a farmland trust in Southern Vermont. I modified the cast on # slightly in order to accomodate my desire to knit the hat on 7s — in part because my 8s are in use, and in part because I want a denser fabric. Hoping to have this warming my ears soon!

I finished these thank you-dishcloths yesterday, which means I’ll have no excuse if they aren’t in Tuesday’s mail. You heard it here first! Also, we were invited for dinner at a friend’s house a few nights ago, and bread was requested, but it was too late in the day to start my go-to no-knead bread. I opened Mark Bittman’s big yellow book, and found a recipe for a lighter whole wheat bread using baking soda, yogurt and honey, and ta-da: 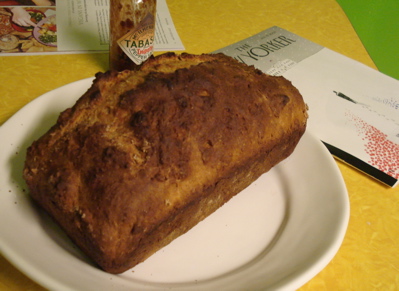 A hearty, wheaty quick bread that has been great with morning omelettes. I’ll be making this again.

Rather than take advantage of the free time to get ahead on reading, thinking, language study, etc. this weekend, I’m planning to knit and spindle away the afternoon before a planned evening of hunkering. There will be calzone-making, movie-watching and wine-drinking here at Chez Rooster — the dough is steadily rising!

Oops…I may have accidentally knit a beret — Le Slouch, by Wendy Bernard, to be exact. How did that happen?

I wanted something simple and soft to work on…and even though spring weather is definitely here, early desert mornings remain cold enough for beautiful headgear all through the summer.

I didn’t want a full-on beret, but rather a comfy hat that wouldn’t flatten my curly hair in the morning. I followed Wendy’s instructions for the stockinette version, using US 8 and 9 DPNs, and began the decreases at just under 5 inches. The yarn is Malabrigo in colorway verdeazul, and while the pattern called for roughly 200 yards, I’m wondering if I can get another full hat out of what is left — looks like I used just over half the skein.

I also managed to cast on for the Lace Ribbon Scarf. I can see how folks get into a rhythm with this pattern, as I sat down to get started and looked up 10 rows later. This Yarn Pirate booty is tough to photograph, as the tencel in the yarn seems to make it super shiny to my camera. In real life, it has a subtle sheen that I think will really add to the beauty of the scarf.

Also, more evidence that my dog is absurd: 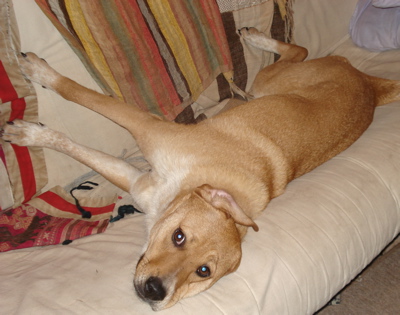