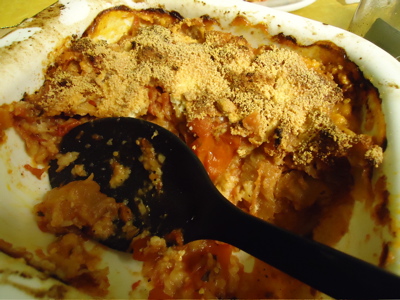 Dear friends came for dinner last night. (Boh was on cloud 9.) Y’all know I love to play in the kitchen, but I especially like cooking both for and with D and T — we have similar tastes (well, aside from D’s brutal hatred for all things eggplant), we belong to the same farm, and we always have a good time together. They brought homebrew, a bottle of homemade limoncello for my freezer(!), beer brewed with Japanese hops for us all to try (it DOES taste like “sunshine in a glass”), and tortilla chips for the mostly-tomatillo-with-a-peach-thrown-in salsa I made. And I decided to test out some new-to-me recipes based on what could be found in my fairly full fridge. After lots of drooling over recipes on my computer screen, I settled on two ideas from Deb over at smitten kitchen: scalloped tomatoes with croutons, and everyday chocolate cake. I paired the tomatoes with a salad of very peppery arugula, cherry tomatoes, goat cheese, and cherry tomato confit with a homemade vinaigrette with a bit more honey than I usually use. I was really happy with how everything turned out — these recipes have earned spots in my kitchen binder! 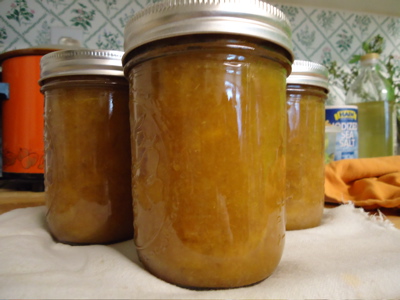 Also, here are the results of peaches +bourbon, take two. I did use the immersion blender to make this more sauce-like, and I’m thrilled with the consistency: thicker and smoother, but with chunks of peach.

And here’s what I’m casting on later this morning. I’ve been meaning to start a hat for D. He’s sporting a new haircut these days, and as the weather gets a bit colder, I want to contribute a hat or two to his headgear collection. I was inspired by the Windschief that Laura posted yesterday, so I hopped over to Ravelry to look through other people’s FOs, and ultimately, purchase and print out the pattern. I’m using tosh worsted in malachite, and I’m psyched to cast on.

I really should be reading all day today, but I’m going to allow myself at least a little bit of time for knitting…

And that’s just what was left on the counter when I thought to grab my camera. The first raspberries and blackberries have ripened, so we were able to pick 1 pint yesterday. I also brought home a handful of deep sweet red peppers, a baby eggplant, cucumbers, zucchini, orange and yellow carrots, pink and orange beets, rosemary, parsley, and spring onions. (I chose to load up on the heartier stuff this week rather than go the lettuce/cabbage/salad mix route, but all of that deliciousness was available as well!)

I tried out a recipe for onion biscuits from a favorite cookbook of mine (Recipes from America’s Small Farms), but these were only okay. (I still highly recommend this cookbook.) Part of my frustration stems from the fact that I didn’t watch these carefully and they turned out a bit too golden. (Multitasking while baking a new-to-me recipe is clearly not a good idea.) But beyond that, these were too harsh and onion-y, and I cut back on the onion in the recipe. I think these need some cheese, or even something sweeter, like a touch of honey, to counter the super strong onion-y taste. (And I love onions.) I was going for a kind of summery biscuit dinner, so I made a very light tomato sauce with zucchini, squash, fennel, onion, and basil to pour over these. The sauce was delicious, but not an awesome match for these biscuits. You win some, you lose some, right? 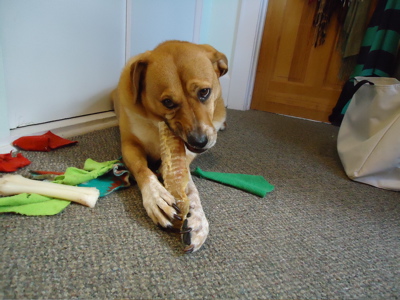 Boh, on the other hand, won big yesterday. I picked up a trachea while restocking on Boh’s food at the natural pet supply store in town, and he spent the afternoon working his way through it. Cheap, fun for him to eat and play with, and a natural source of glucosamine. Triple win.

I spun a bit more of the brown alpaca yesterday, and I’m almost through the second three ounces. Plying soon, but probably not today. 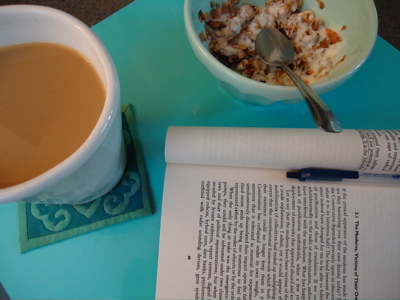 My morning has already involved a heavy dose of this, and it is time to get back to it.