My new inspirational mug, from The Rumpus. Feel free to swap out “write” for “read,” “comment,” “eat,” or “knit.” I’m a little slow to attack the work pile this morning because I know I’ve got a whole day of writing comments on papers and prepping for class ahead of me. And really, I’d rather knit and snuggle Boh on the couch.

He’s just so sweet. And helpful. 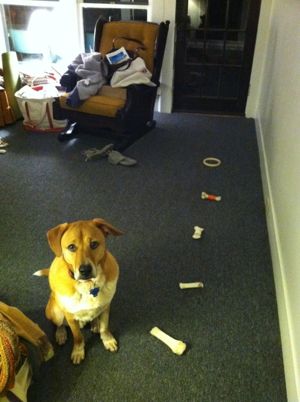 And somehow literate? (I don’t know what you think about this photo, but this suggests secret code to me. I was in the kitchen with my friend M., and we came out to the family room to find that Boh had arranged ALL of his bones in a straight line. What could it mean?)

And here he is, politely asking for a bit of my open-faced ham sandwich made with the best (local) deli ham I’ve ever eaten. Sorry, Boh. Ham sandwiches with really good cheese melted under the broiler are for people.

One more food photo, snapped at my friend J.’s house. I brought the salad, she made an excellent risotto, and before we sat down, we both decided that our meal was so pretty that we needed to document it (before we inhaled it and went back for seconds).

And here’s a view of the driveway from the porch. It doesn’t look like this right now, as it’s been a warm week, but this is what it looked like last Saturday morning after I spent an hour shoveling the whole thing. (Which I did partially because I hosted reading group last week, so there were more cars than usual in the driveway, and partially to just get a sense for how long it would take, since I need that information to plan to have enough time to dig myself out and get to campus for the class I’m teaching, if ever I wake up on Monday or Wednesday to a snowy yard.) Hope you’re having a great weekend! It’s about time for us (you know, because Boh will “help”) to get to work.

As you can see, today’s post is also sponsored by the letter S. Despite yesterday’s whining about the snow day that was not to be, all of my students showed up for section. If things had been reversed, I would’ve picked snowshoeing over school, so they all get a great big high-five. When I returned home, a mountain of shoveling awaited me. 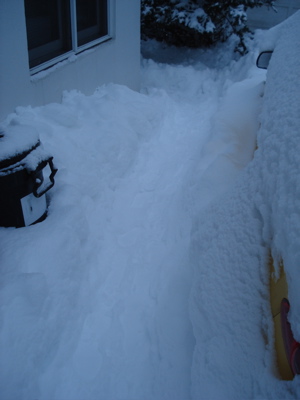 The door to my apartment is on the back of the house. I’d say my part of town got about 15 new inches of snow on Thursday and Friday, and then some high winds helped to create some substantial driveway drifts! I shoveled a winding path from the street, zigzagging around the cars in the driveway, and around the back of the house to my door. Every time Boh and I walk down it, I feel like I’ve created some kind of Olympic ice luge or bobsled track. I also had to dig out my car, which I did in two 1-hour chunks.

My friend T. did quite a bit of shoveling yesterday too, and she came over last night to commiserate with a bit of wine and some sour cherries, which we promptly turned into coffee cake!

T. is a teacher, and she used part of her snow day to defrost these cherries and pit them. (So even though I didn’t get a snow day, I certainly got to enjoy the spoils of a snow day project!) We made this coffee cake, and it was fantastic. 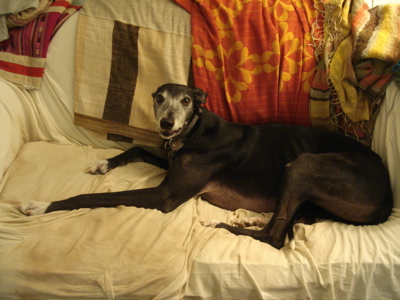 T.’s sweet dog, Coltrane, came over to play with Boh, and once we convinced him to get up on the couch, he decided to spend much of the evening lounging.

Best friends. (Though Boh was whimpering a bit at the idea that he had to share his couch with Coltrane!)

One last picture — I think I am subconsciously responding to all of the bright whiteness outside! A glance in the mirror had me laughing at my apparent attempt to wear all of the colors of the rainbow at once. Silly rooster!