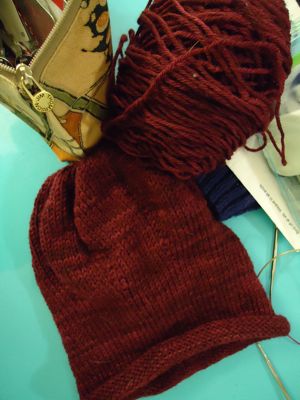 I accidentally finished this hat instead of finishing a book yesterday. Oops! I used Araucania Nature Wool (about 2/3 of a skein), size 6 and 8 needles, and I cast on 90 instead of 70 stitches. And then I followed the pattern. Now, I’m going to show you a picture of me wearing this hat. I don’t think this is the kind of style that works well on short, big hair. Good thing the intended recipient has smooth, shiny hair. So it should work, right? (The other concern I have is that it looks really awkward not on a human head, you know? Too big, and sort of weird. Oh, well. Maybe this will be a test of how well my brother’s girlfriend receives handknits?!) 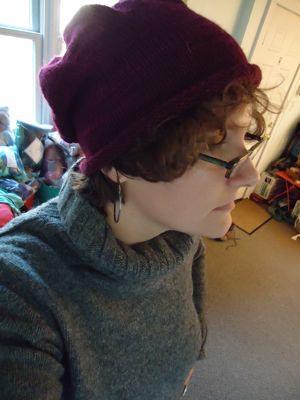 This hat is poofier than it looks in this picture. Trust me.

Boh was passed out in the background when I was getting ready to take this picture. And then I said, “Are you hungry?” Which was sort of cruel, as it was not yet dinnertime.

There is nothing cuter. 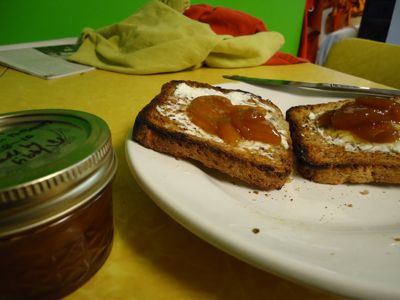 Also, remember how I won amazing peach rum preserves over at Libby’s blog? Well, I dug into one of the jars today, and this stuff is INCREDIBLE. Note to self: make A LOT of boozy peach preserves next summer.

Tomorrow I am going to a dance party. For my favorite (almost) eight-year-old’s birthday. And you know what I’m giving him? Yarn.

I’m told I’ll get to do the Macarena.