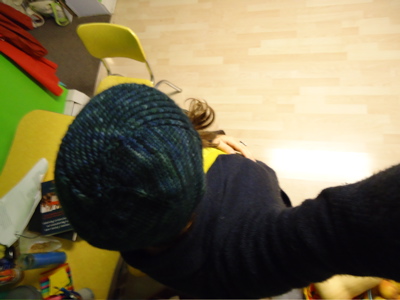 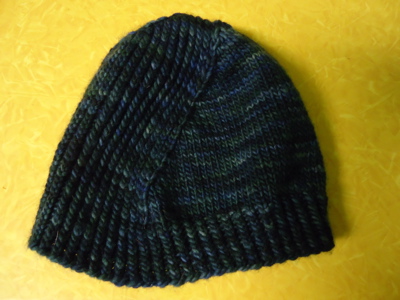 Apparently I shouldn’t  even decrease the crown of a hat before fully completing the day’s first cup of coffee. Part of the way through both the hat and my first mug, I realized that my stitch counts between markers were slightly off. And being mostly pre-coffee, I decided to fake it, and left out a decrease in one section and decreased in a non-decrease row right before the decreases switch from every other row to every row. And on a human head (mine, above), I think any slight wonkiness is hidden by the variegation in the yarn and the general awesomeness of this pattern. So I’m calling it good. We’ll see if I can get some boy-modeled shots to share.

And now, the details. This is the windschief hat by Stephen West, size M, knit in Malabrigo Worsted in the verdeazul colorway, as directed, on size 6 and size 7 needles. I used what looks like half (or slightly more than half) the skein. And at this moment, I’m too lazy to go into the kitchen and weigh it. So you’ll have to trust me on that. Also, this pattern? I still love it.

Alright, time to finish this mug of coffee and get ready for the day. Is it Friday yet?