So this is the first half of the grey alpaca I’m spinning for my friend N., after setting the twist and hanging it to dry. While neither of these mini-skeins is next-to-skin soft, I’m really happy with the halo and the sheen of this yarn. What you’re looking at is about 160 yards. I delivered the first half of the alpaca to N. yesterday afternoon, and decided to work on the second half after dinner last night. One of the remaining bumps of fiber felt softer, so I spun that first. Here’s the bobbin:

I think you can see the difference in the quality. N. told me that she paid five bucks for almost eight ounces of this stuff, which makes sense to me. I think some of this fiber is the “good stuff” from the animal, but I think a lot of it might be the hair from the less prize parts of an alpaca’s coat — like the underbelly, maybe? That would explain the amount of veggie matter in the first two bumps. Here’s the final (larger) bump after separating the fibers a bit with my hands:

I love the depth of color in this picture — such a complex grey. This was coarser, more like the first two skeins. I think singles were the right choice for this yarn — and hey, I’m no longer afraid of alpaca! Maybe I’ll dig out what I’ve got from my very first fiber purchase and try again. 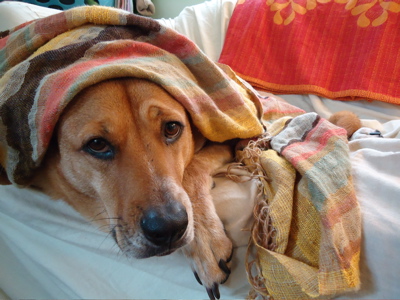 I’m pretty sure that this expression has something to do with the fact that Boh finally understands that there is not an alpaca in the kitchen. Just some yarn hanging to dry.

A few glimpses of the weekend:

Deb’s scalloped tomatoes, made with the last of the season’s farm tomatoes.

After dinner hot chocolate made with dutch cocoa, organic sugar, and milk.

And this morning, I pulled on my down booties when I climbed out of bed in the darkness to make my coffee. I’m ready for daylight savings — I’d rather get up with the sun than rise before her.

5 thoughts on “FO: half the grey alpaca.”