“…where the rivers change direction across the great divide.” Other Voices, Other Rooms (Nanci Griffith) was on the stereo throughout a fun Saturday night at the home of friends, which prompted me to digitally dig out some Nanci to accompany me through my Sunday.

Though it warmed up to the low 70s yesterday, the morning heralded the coming fall, and I certainly needed my socks and mitts for our first lap around the neighborhood. Today’s weather is supposed to be similar — in the 70s by mid-afternoon, but cool and autumny right now.

In preparation for fall — and for a great evening of knitting, wine, and pie — I cast on the Botanic Hat with my leftover Five Plum Pie handspun and some Cascade 220 leftovers.

I am loving this hat already: involved enough that I’m interested and paying attention, but simple enough that it qualifies as social knitting. I started on 6s as directed in the pattern, and then decided to stick with 6s after the ribbing instead of changing to 7s in order to compensate for the occasional variability (read: thinner sections) of my handspun.  Here’s a shot of the inside: 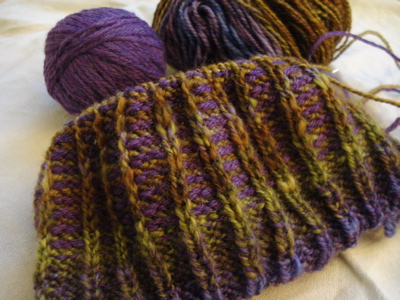 I love that this hat is reversible! I’m thinking that it may become a go-to pattern for this year’s holiday knitting, which I guess I should start thinking about…

7 thoughts on ““now i find myself on the mountainside…””