I took the day off from academic work, but I have a hard time stopping. I have a hard time not doing things, which is one of the reasons why knitting adds so much to my life — it helps me to slow down, because I am still being productive while I am doing it!

Anyway, the day involved some serious d-o-g-p-a-r-k time, which was particularly enjoyable because Boh was the ONLY dog there at 9 this morning, so we got to play together in a big open space before a few adorable german shepherd mixes came along to frolic. I went the the coop, made granola, did some general straightening of things, knit and spun a bit, and even got out my entire fiber stash (which is rather sizeable, due to my membership in the Woolly Wonders club over at A Verb for Keeping Warm and 4 months of Spunky Club fiber) to photo-document it and enter it into ravelry. (This move may also have been prompted by some anticipatory-wheel-arrival acquisition of small amounts of undyed corriedale, merino, alpaca, norwegian, bfl and cotton from Paradise Fibers for practicing.) 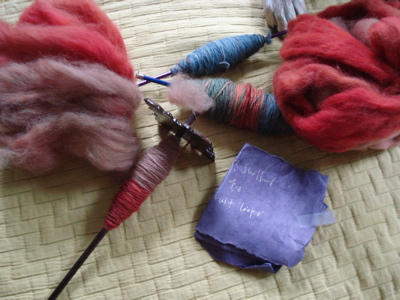 I snapped this photo of the fruit loops shetland from AVFKW that I’m currently working on. In the background, you can see how I started — fairly even, thinner single for plying. Upon returning to this project, I decided to try something new with the shetland, and really try to keep the color repeats. In the middle, you can see the rest of the first half of the fiber, and on the spindle in the foreground is the beginning of the second half. This section is all reds and oranges, and I am in love. 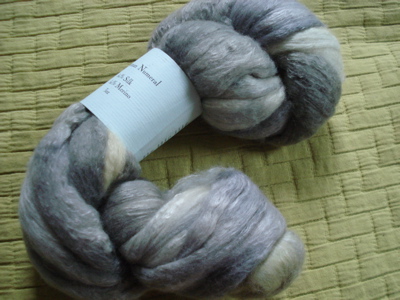 Remember how I told you that I won this contest over at sock pr0n? Well, the merino-silk blend in colorway Roman Numeral arrived today, and it is gorgeous. This picture does not do it justice. Plus, Aija tucked in a sample of a yak/merino blend from Tactile Fiber Arts that is just lovely. Somehow I managed not to snap a picture of that, but I’m sure you’ll see it here soon, maybe even spun on my wheel!

I also got this project out again. It’s been so long, I wouldn’t blame you if you didn’t recognize it…

Thuja, for my uncle — promised at Christmas-time, when measurements were taken. He has size 11 feet. After noting his ankle circumference, I decided to up the st count to 48 st from 44. It is time for the toe! (Clearly I do not wear a men’s 11.) I don’t know why I’ve had such a block in my brain when it comes to these socks. Maybe I was tired of frantic gift knitting. Either way, I really want to finish these by the next time I head home and see my (favorite) uncle — which could be as soon as the end of the month.

Something totally random: I decided to post this evening because I returned home from a bit of celebrating with a friend who passed a grad school milestone today, and realized I wanted to take a shower before getting into my clean bed. Though I am very tired, my hair is wet, and if I want it to look reasonable enough to just wake up, make coffee, and head off to some Friday morning meetings, I need to let it dry a bit. Hence the post. Sigh. Happy almost Friday!