Recipe from Apples for Jam. (Self, you are so clever.) I know that I am super late to this party, but while I was in NYC, I found this cookbook by Tessa Kiros at Anthropologie for under ten dollars. No brainer. This weekend I made both the Pear and Berry Crisp (with pears, apples, and some frozen blueberries), and the Lentil Soup (with more liberal modifications based on the contents of my fridge and pantry). Balsamic vinegar with lentils is a brilliant idea, by the way, and here’s a shot of the crisp: 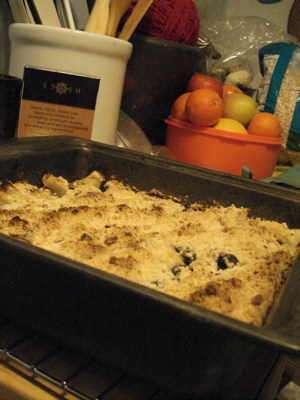 Boh and I went for a great run along the river on Saturday, which is my way of telling you that I am eating this for breakfast momentarily. Before I can dig into the crisp, how about a bit of knitting? Still knitting away on Brompton (so excited about this) and several other projects, but again, knitting time does not equal visible knitting progress. More on those soon.

I’m making serious progress on the Gathered Scarf. While not the quickest knit, due to all the needle switching and kfb/k2tog, this is a lot of fun. It doesn’t hurt that the yarn may be the softest I’ve knit with: Blue Sky Alpacas Suri Merino, for those of you just tuning in. In this picture, the scarf is not yet wrapped around my neck.

Last night I started my third skein, and I think this is going to be long and luxurious. This is a pretty substantial knit, and while I wouldn’t call the scarf heavy, I think it will stretch out considerably with wear. I absolutely adore superlong scarves, so I think this will become fast favorite. It is starting to warm up here in the afternoons, so I better hurry up and finish it so I can wear it before next fall!

I think I mentioned that I was in need of an unplanned, relaxing weekend. If this picture is any indication, we were successful. 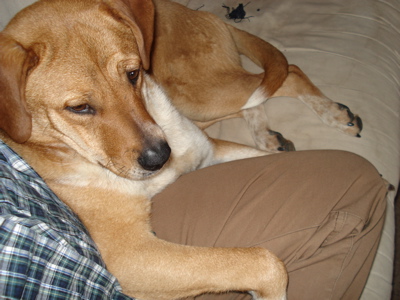 Hope your Monday is off to a good start.

1 thought on “pears for crisp…”